Our client, Mantra DAO, is developing a community-governed DeFi platform aimed at giving financial control back to users through a transparent and decentralized ecosystem. The platform is focused on lending, staking, governance, and launchpad services.

PixelPlex helped the client build an efficient DeFi solution by developing smart contracts, deploying new staking pools, performing a migration to the Solana blockchain — and delivering a range of other enhancements.

Together with the client, we established the key project goals:

The ability to manage assets staking and governance in one place

The platform’s own token – OM token 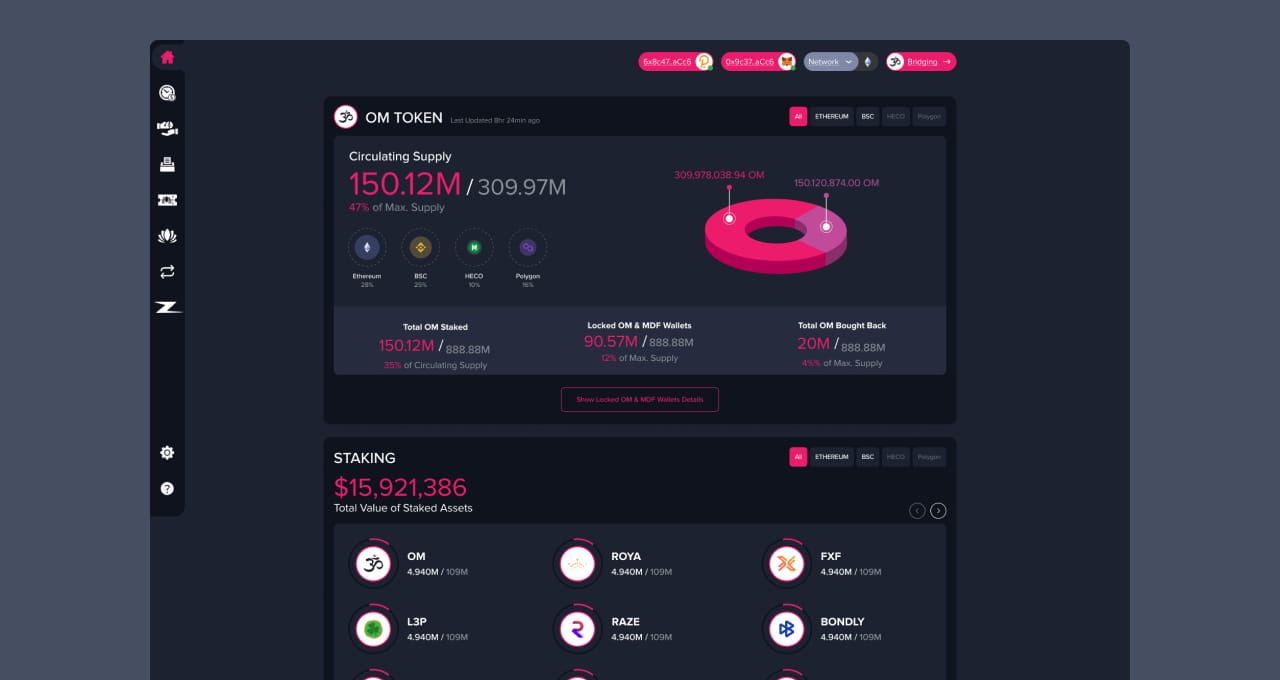 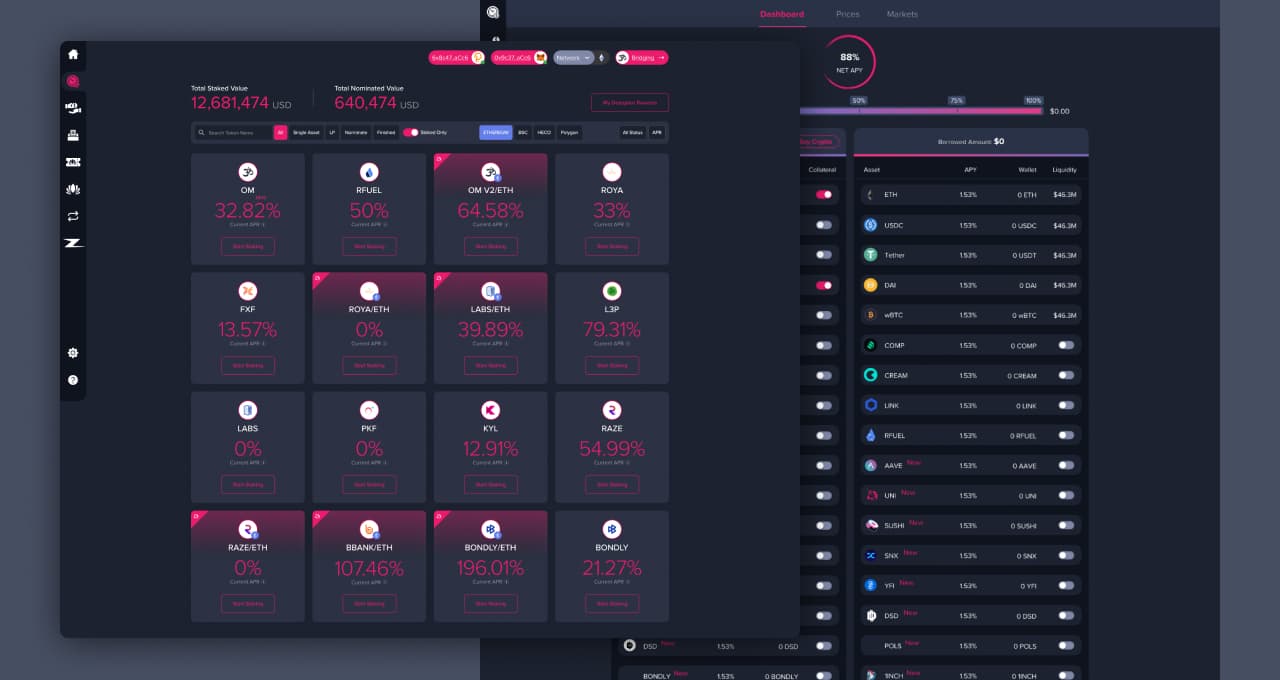 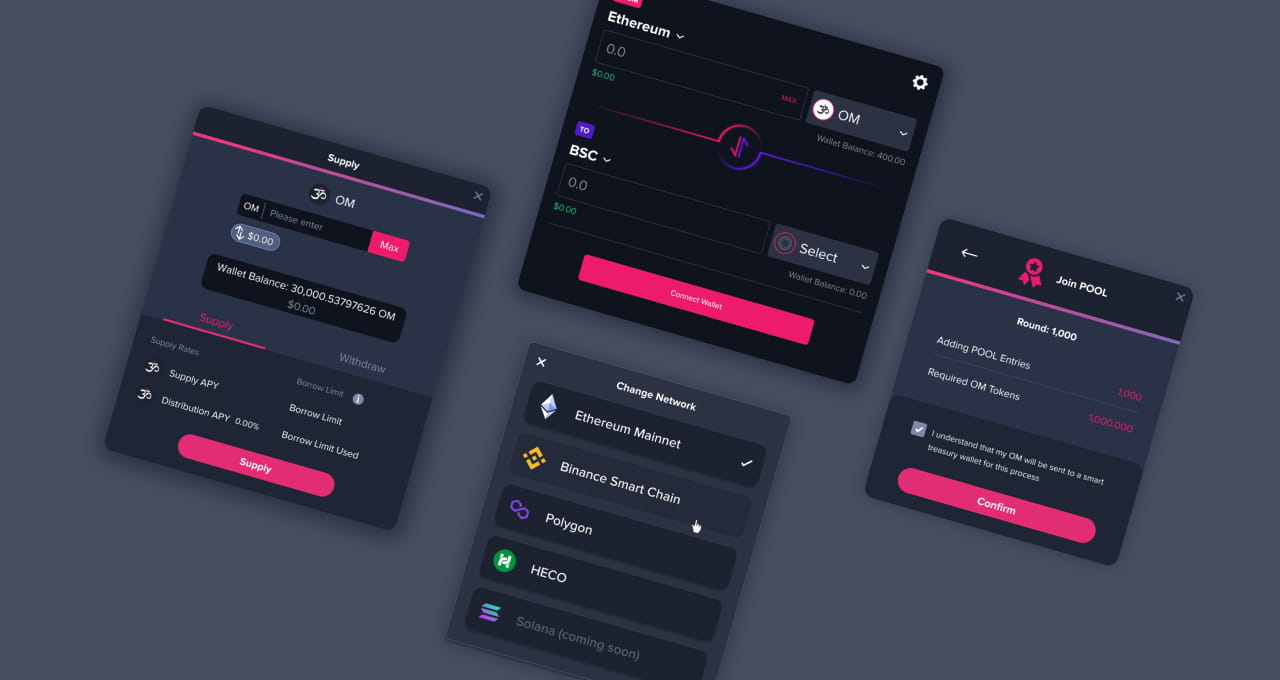 * The design of layouts was provided by the client.
Smart contracts development

One of the largest of Mantra DAO’s modules is Staking, which allows users to stake tokens and receive token rewards. The company offers both single asset and LP staking pools. The client had already developed staking smart contracts when we joined the project, but they had bugs that could lead to potential security issues in the production environment.

To prevent security problems, our team resolved the bugs in the LP staking smart contract and followed up with unit tests. We also developed a smart contract for single asset staking from scratch. The logic we introduced makes it easy to roll out new staking pools.

Mantra DAO regularly partners with different organizations and adds further new tokens to staking pools. For each partnership our specialists deploy new staking pools based on the parameters provided by the customer (for example, token owner or token rewards).

To begin with, our team implemented new staking pools on the Ethereum network. In order to offer a chain-agnostic solution, the client extended their staking to Binance Smart Chain and Polygon, so our team is now also responsible for deploying new staking pools for these platforms.

Focusing on enhanced security, the customer approached SlowMist – a company engaged in blockchain ecological security – to perform security audits of smart contracts developed by our team. After a detailed analysis and testing, our smart contracts successfully passed the audit with no major issues found.

PixelPlex assisted the client with the development of Zendit launchpad. It uses a decentralized fixed swapping protocol which provides transparency with regard to the number of tokens offered during a token launch. Zendit offers the client’s partner organizations the necessary resources and support to launch their tokens.

The distinctive feature of the implemented launchpad is that it offers the opportunity to use a Dutch Auction style of launch in addition to standard fixed swap protocols. The major benefit of the Dutch Auction mechanism lies in it being a decentralized and democratic way of determining the price of a company’s coin, where bidding for an item begins with a high asking amount which is systematically lowered until a user makes the winning bid and the item is sold.

PixelPlex assisted the client in implementing the logic for migration from staking pool V1 to staking pool V2 and token swap to OM V2.

OM V2 is an enhanced version of the OM token, which has many important advantages, including but not limited to:

Thanks to the implemented logic, Mantra DAO end users can migrate to a new version in only a few clicks and start staking OM V2 tokens.

Development of a migration mechanism

The major problem was that the first version of the staking pool developed by the client didn’t have migration functionality. It was essential that users’ existing assets could be seamlessly migrated to staking pool V2 so that users who had tokens in staking pool V1 could easily receive rewards in the new staking pool.

Our team conducted technical research to make the required migration possible. We made changes to the existing architecture of the solution and implemented a migration mechanism. As a result, the platform’s users were able to easily move to staking pool V2 without losing their existing tokens and rewards.

Moving from Ethereum to Solana

Having initially built their DeFi platform on Ethereum the client decided to switch to Solana. Solana has multiple benefits over the Ethereum blockchain, such as:

Our blockchain consultants prepared research, which covered multiple aspects and the various peculiarities of the Solana blockchain. It included details such as a high-level overview of the platform, the ownership of accounts, a guide on how to create a coin in Solana, and returning values from cross-program invocations.

When the final decision to move to Solana was made, the client asked our team to choose the optimal migration strategy and then proceed with the chosen variant. PixelPlex tech specialists researched different migration options, evaluating the pros and cons of each scenario.

Initially, we considered taking advantage of the Solang compiler due to its flexibility and time-efficiency. However, after reviewing the limitations associated with Solang, we decided to go with rewriting everything in Rust. This approach allowed us to achieve increased flexibility and performance. Currently our team is in the process of migrating to the Solana blockchain.