Telegram Open Network was Pavel Durov’s attempt to tackle many pressing issues of blockchain implementation with the introduction of modern infinitely-scalable hypercube architecture. The project has been discontinued on May 12, 2020.

Unfortunately, the TON network project has been abandoned by its creators due to the results of a lengthy legal battle with the US Securities and Exchange Commission (SEC). On April 1, 2020, the court ruled Telegram to refrain from issuing its Gram cryptocurrency due to it not meeting the Howey test. The Gram token was to be the cornerstone and one of the building blocks of the TON economy. Following the injunction, on May 12 Telegram’s CEO, Pavel Durov issued a statement announcing the discontinuation of the TON blockchain project.

You probably have already heard about Telegram and its TON Telegram Open Network after its smashing ICO raised over $1.7 billion with the introduction of a new cryptocurrency claiming to conquer the mass market. If you’re still not in on the buzz, don’t worry, we’ll fill in the gaps. As for the ones looking to dig deeper, we’ll give you all the latest updates and share our expert opinions on the next generation blockchain network applications and its potential to change the crypto world as we know it.

Telegram Open Network: What Is It and Why It’s the Next Big Thing?

It wasn’t so long ago, back in 2018, that Telegram announced plans to introduce its new Gram cryptocurrency and a whole new Telegram Open Network (TON) blockchain platform & ecosystem aimed at revolutionizing the blockchain space. Now we have a technological breakthrough on our hands.

If you are not familiar with WhatsApp’s toughest competitor, Let us fill you in on the details of Telegram. The intrinsically secure, powered by strong encryption, Telegram messenger has been around for quite a while, consistently destroying the competition.

At the beginning of 2018 Telegram messenger had over 200 million active users, rapidly growing in popularity and taking over the market. As of today, Telegram’s user base has crossed 1 billion, closing in on WhatsApp. That is to no surprise as it has an obvious advantage in speed, encryption, independence, and a plethora of cool stickers & GIFs to efficiently convey your emotions to friends and family. 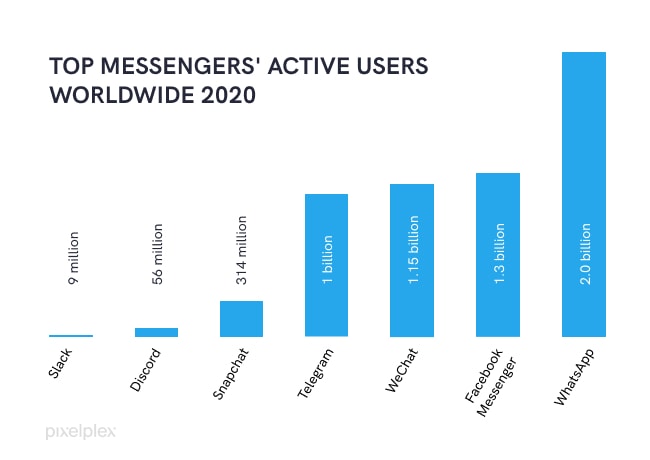 Being created out of its developers’ sheer need of communicating privately, Telegram has built-in security features and is ideal as a platform for incorporating and sharing decentralized services. That is why it has been the messenger of choice for privacy enthusiasts and the global blockchain community right from its inception. On top of that, Telegram messenger has a lot of users who are interested in in-app money transfers.Top Messengers’ Active Users Worldwide

With such a large potential user base and advanced architecture crafted from the best ideas that have come up within the crypto space, TON promises to become a revolutionary blockchain platform.

With Gram as native cryptocurrency, TON currently offers the highest transaction speeds, sophisticated architecture that accommodates blockchain interoperability, and has the capacity to infinitely scale and dominate the market.

TON Labs is on the road to creating an advanced DeFi ecosystem and a solid ground for the future blockchain 3.0 environment with:

However, deployment of DApps and enterprise-grade solutions targeting the global financial market and ecosystem will require qualified experts like the blockchain team at PixelPlex. Our team is able to provide development services on par with industry best practices and has proven DeFi development experience. PixelPlex is ready to support Telegram Open Network with custom DApp development and sidechains integration within its DeFi Echo platform project.

Telegram TON third-generation blockchain network is backed by TON Labs, the same team of entrepreneurs and developers that brought to life vk.com, the 23rd most visited website in the world in 2020, according to Alexa. The company shows no signs of stopping, having also self-funded the development of Telegram, another prominent social-networking app.

Telegram and TON Labs CEO, Pavel Durov, is himself an icon among privacy activists around the world. It was him that stood at the forefront of the second-largest ICO in the history of blockchain that raised over $1.7B with two private sales within the first quarter of 2018.

The team’s vision for TON is to create a sophisticated platform with client-side tools and provide a convenient UI/UX to interact with FinTech and DeFi services. This kind of system will create an open environment for creating, distributing and managing blockchain products based on TON for the consumer and enterprise-level businesses.

PixelPlex expects the TON Labs team to succeed in developing their platform into a global network for the community and we are very excited to see what’s next on the horizon. We are thrilled and looking forward to support companies planning to integrate with the advanced Telegram Open Network by providing custom blockchain development services.

Telegram Open Network: Under the Hood of a 3rd Generation Blockchain

In its essence, TON hypercube network is a multi-layered net of blockchains separated into: 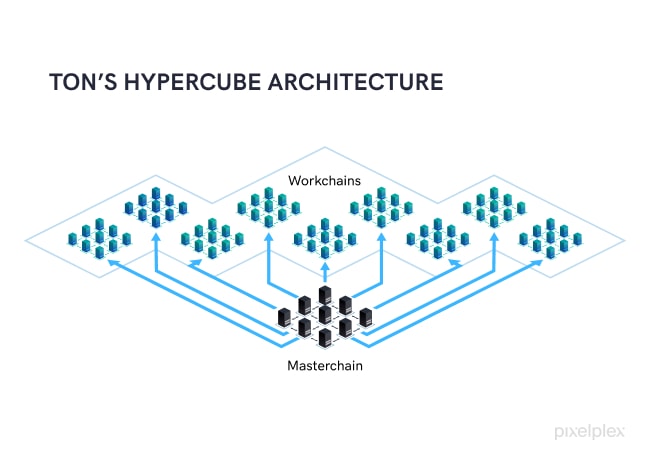 In Telegram Open Network, new blocks can be committed and put in place of incorrect blocks containing all the information necessary to fix the imbalance caused by the invalid block. This saves the chain from the necessity to perform rollbacks to a previous network state and repeating the valid transactions executed before the rollback. Block time in TON is approximately 5 seconds, which provides a much higher transaction confirmation rate as compared to other chains on the market.

Another interesting feature of TON’s architecture is configurable hash. The hash function is chosen via a protocol parameter and can be changed without having to hard-fork through voting. This enables to always keep the level of encryption and security to the highest standard.

The core infrastructure of TON establishes a secure and accessible development environment with an open-source model. This model contains the TON local node and the full developer’s toolkit with all you need for building and deploying FinTech & DeFi solutions to the network.

TON Local Node is supplied via a pre-configured Docker image (TON OS SE) that was created by the TON Labs team as the personal blockchain sandbox for developers. It includes a local server with the TON virtual machine implementation in Rust, the TON SDK, ArangoDB database, a GraphQL endpoint with web playground, Solidity and LLVM compilers, and a pre-deployed Giver.

Telegram Virtual Machine (TVM) is used to execute smart contract logic for the masterchain and the base workchain. It is able to run multiple processes simultaneously and packs the blockchain data into tight batches, enabling increased performance and efficiency. TON’s virtual machine is designed for interchain compatibility, enabling validators to verify transactions on other chains besides their workchain. It also supports code written in other higher-level languages like Java, although this feature is not available out-of-the-box.

The Solidity compiler is there to support the development of smart contracts in Solidity and compiling them to TVM assembly code. Coding contracts in C/C++ is enabled by the LLVM compiler. TON’s compiler toolchain also includes the TON Labs CLI for easily testing and deploying your contracts.

TON SDK consists of the full package of libraries and tools for DApp development using the TON operating system. By installing the SDK, you will have all the building blocks you need: 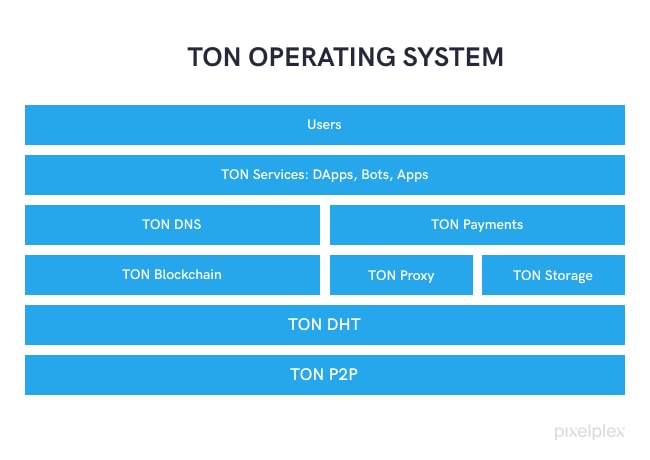 TON ecosystem is comprised of the following essential network components:

* TON OS was still in development at the time of writing.

Telegram holds development competitions to expand the infrastructure of the TON blockchain platform with the awards pool ranging from $100,000 to $400,000. The contests have developers proposing a huge variety of customizations for the TON ecosystem: from DeFi apps to games, betting solutions and even FT-coins. Follow the Telegram contests channel for the latest news.

Here are some winners of previous contests that proposed interesting projects for the TON platform:

Latest Updates and What Else Is in Store

As for new developments from TON Labs themselves, they’ve recently deployed TON Labs Cloud to the Telegram Testnet and other TON based networks. TON Labs Cloud is a comprehensive development environment for building smart contracts and DApps based on Kubernetes clusters hosting several TON node instances, databases and messaging protocols, monitoring tools, and bundled software.

Currently, TON Labs is constantly working on improvements for its Telegram Open Network SDK. To always stay on the pulse of what’s in store, follow the TON Dev and TON Surf development communities.

The Future of DeFi with Telegram’s TON Network 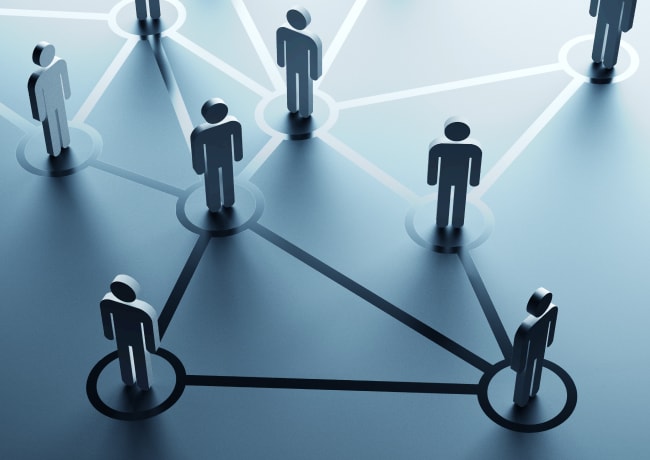 The current market capitalization of decentralized finance solutions and stablecoins stands at over 5 billion US dollars. At the same time, stablecoins are gaining serious traction on global exchanges with trading volumes of four times their market capitalization. At this opportune moment, and especially after the demolishing success of Gram token’s ICO, nothing stops TON Labs from introducing their own stablecoin and taking over the industry.

With its price not tied to any fiat currency and freely traded on cryptocurrency exchanges, a Gram-powered stablecoin has a definite advantage over Facebook’s Libra coin, which is Telegram’s strongest competitor in potential user base. Building an advanced financial system within a messaging app is, by all means, not a new concept, after WeChat’s success in China. However, the tall walls of Chinese governance set serious boundaries for WeChat’s proliferation in other parts of the world.

In the meantime, the Telegram DeFi channel already has over 5,000 members from all over the world, and is very active.

The current-generation blockchain and DeFi space lack a universal distribution platform similar to the App Store in the centralized apps world. With its large potential user base, an architecture supporting a multi-tier system of interoperable, value storing blockchains, coupled with a slick UI/UX pulling away blockchain complexity, the Telegram Open Network can really shine as a global platform for decentralized finance.

Would you like to grasp this opportunity and be one of the first to benefit from providing DeFi services to Telegram’s community? Share your vision with PixelPlex and we will help turn your ideas into the next big thing with our expert DApp and blockchain development services.