The ADA was enacted to ensure that individuals with disabilities have the same civil, legal, and human rights as others and are not discriminated against. Within the digital landscape, this means that businesses need to provide accessible content and web services or otherwise bear serious consequences, including litigation, heavy fines, and penalties.

The 20th century saw the rise of the disability rights movement, involving thousands of people, protesting against the discrimination of people with disabilities.  The movement spread awareness about the rights of the disabled people and advocated treating them as a minority group with equal rights and access to products and services.

Legal acts were introduced to provide disabled people with equal opportunities in employment, access to local and government services, transportation, and public accommodations. With the internet increasing its role in every aspect of people’s lives, the applicability of these laws has gone far beyond the physical places of public accommodation and spread into the virtual world of websites, online apps and services.

What is the ADA? 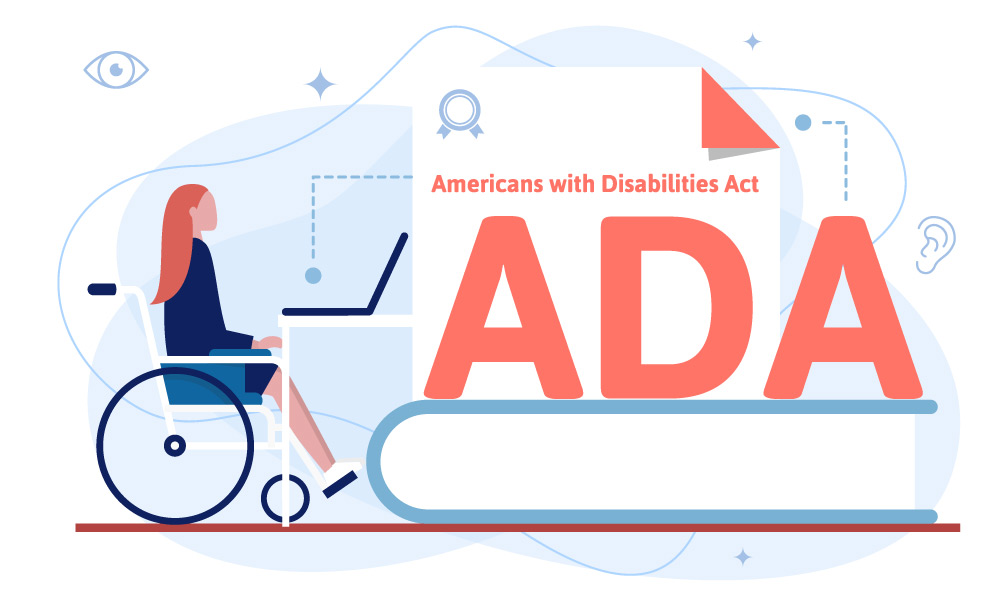 The Americans with Disabilities Act (ADA) was passed to protect the rights of disabled individuals and give them fair and equal opportunities in all spheres of education, business, and employment opportunities in government and private sectors. All public places, schools, and government bodies have to abide by the ADA. Public places include workplaces, restaurants, parks, banks, institutes, and other places generally open and accessible to people.

As a result of digital transformation with online resources now also regarded as places of public accommodation, businesses and state organizations are required to provide the same experience to people with impairments as they do for regular users of their websites and apps. Online services need to be integrated with accessibility features to cater to the special needs of people with disabilities.

History of the ADA 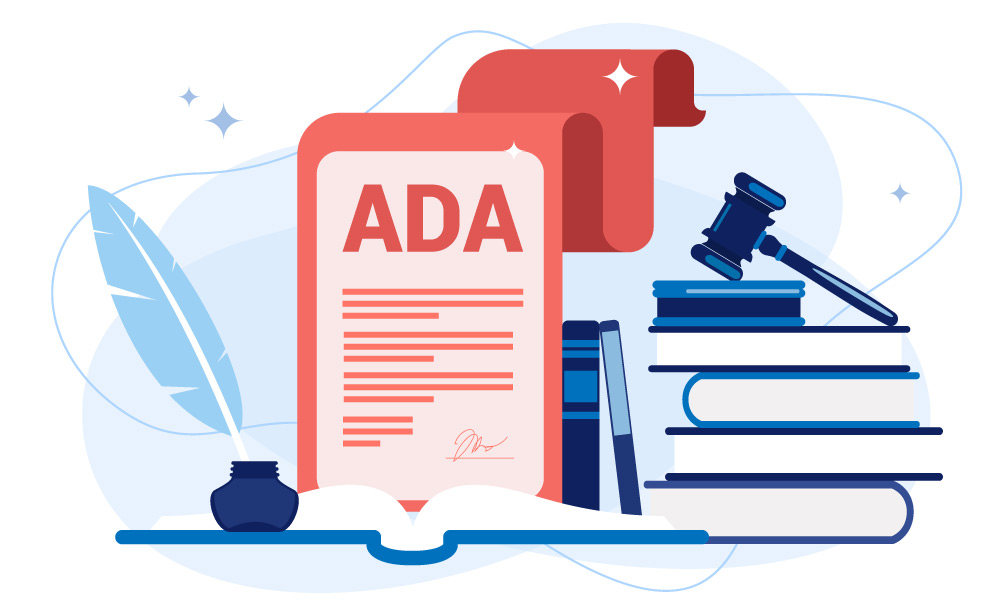 Before ADA was passed in 1990, people with disabilities were discriminated against in key areas of public life. As the years passed, the attitudes changed with a realization of their capabilities and a better understanding of their special needs. There was more willing to accept them as members of society and integrate them within the community.

Section 504 of the Rehabilitation Act of 1973 was the first legislation enacted that guaranteed certain civil rights to people with disabilities. It acknowledged and protected the rights of people with various disabilities, and served as an exemplar for future laws and regulations concerning disabled individuals.

A landmark report titled “On the Threshold of Independence” was released in 1986 by the National Council on Disability (NCD), an independent federal agency of the U.S. government. The report endorsed the civil rights of people with disabilities and laid the foundation for the ADA. In 1988, the council issued and introduced the first version of the bill at the 100th U.S. Congress. The bill, ADA, was signed as a law in 1990.

The ADA supplemented the Civil Rights Act of 1964 which guarantees equal rights and equal treatment to all American citizens and outlawed segregation from discrimination in public places, programs, and facilities. The ADA is comprehensive legislation that underwent several amendments over the years and contains the following chapters:

ADA Amendments Act (ADAAA) of  2008 emphasizes the definition of disability in favor of broad and wider coverage of individuals. It makes it easier for a disabled person to prove that they have a disability when filing claims or a lawsuit to court.

What is a disability under the ADA? 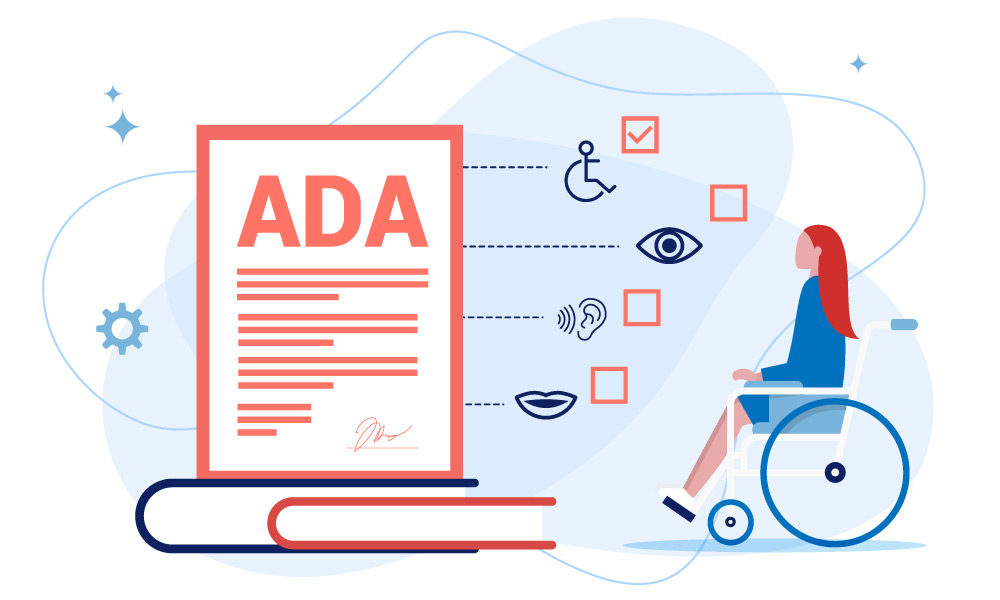 The definition of a disability under the ADA differs from the actual medical term. To be protected by the ADA, a person must have:

People who are perceived or treated by others as having a disability are also protected by the ADA act. These people are often discriminated against out of others’ fears of the disease or certain misconceptions about the severity of the impairment.

What is ADA compliance? 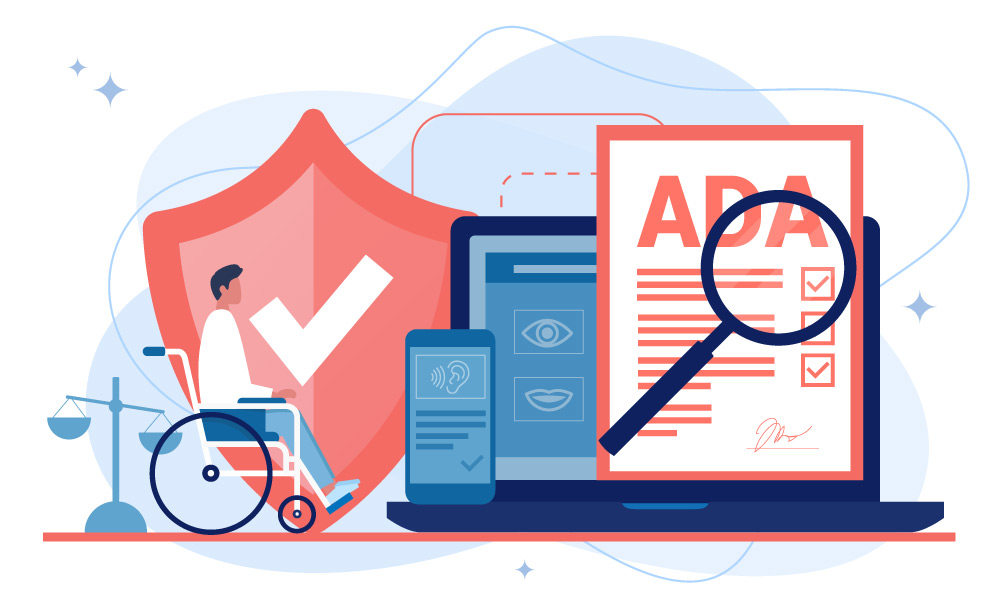 ADA prohibits any discrimination against disabled people with regard to employment opportunities, availing public services, and participating in various programs.  The law defines rules and regulations for accessibility in public places, such as wheelchair ramps, wider doorways, visual cues for the deaf, etc., hence removing barriers and making the place equally accessible for a disabled person to participate.

ADA has its roots in Section 508 of the U.S. Rehabilitation Act of 1973, which made accessibility of electronic and information technology (EIL) to the disabled mandatory for all government and federal agencies. In the 21st century, with the widespread use of the internet and mobile apps, ADA is interpreted to apply to the virtual world in addition to physical locations.

Past records of ADA website lawsuits show that the federal courts and the Department of Justice consider websites and online content as places of public accommodation upon which the accessibility laws are applicable.  The law mandates the removal of digital barriers making online services equally accessible and participatory to the disabled people. All web services and digital content has to be designed and developed to incorporate the special needs of people with various impairments so that they have the same online experience as others. 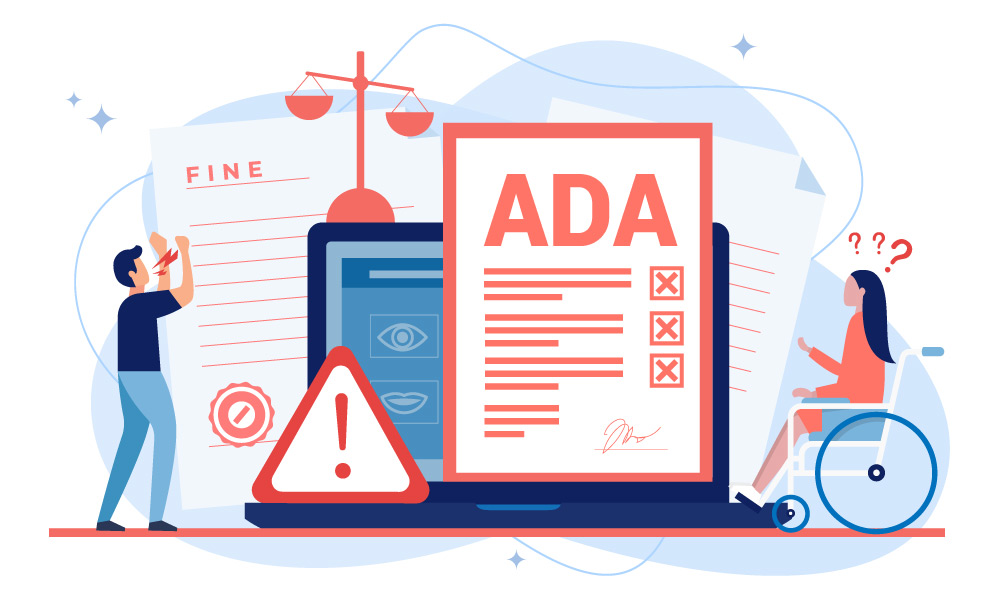 ADA non-compliance can result in individual or class action lawsuits. ADA website lawsuits surged from 814 cases in 2017 to 2,314 cases in 2018. The overhaul continued throughout 2019 does not show signs of stopping. Past records show that exorbitant amounts were paid as compensation for case settlement. Also, companies ended up paying for the plaintiff’s attorney fees and additional amounts in damages according to the federal and local state laws.

The risks of ADA non-adherence involve: 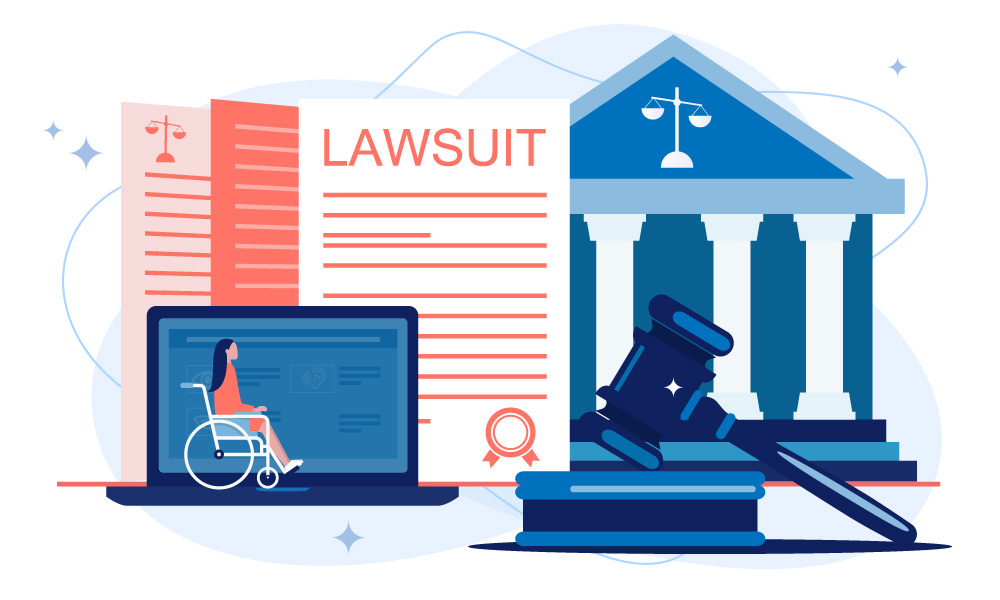 With the advent of the internet and web, ADA website accessibility lawsuits saw court rulings establishing the web and online apps and services as places of public accommodation to which ADA was applicable These lawsuits came to be known as “bricks vs. clicks” that extend ADA to the virtual world. In the past, most of the lawsuits involved the plaintiff demanding that the accessibility features be added to non-compliant websites, in addition to claiming damages to cover the cost of the lawsuit and attorney fees.

In 2002, Robert Gumson, a blind man, together with Access Now sued the Southwest Airlines Company for not being able to access their website. This was one of the first lawsuits regarding ADA website accessibility and the ruling went in favor of the defendant, with the judge stating that websites are not covered by ADA Title III.

Several years later, a class-action lawsuit was filed by the National Federation of the Blind (NFB) against Target, a supermarket chain in the U.S., on the grounds that visually impaired individuals could not use Target’s website. The case ended with Target paying $6 million in damages in addition to the cost of training sessions conducted by NFB for Target employees, with each session costing almost $15,000.

The outcome of Target’s lawsuit was a victory for the disability rights activists and groups. The court ruled that online services were closely tied with the physical operations of the brick and mortar store, hence, their accessibility to people with disabilities was mandatory. It was the first case that recognized the web and online services as places of public accommodation upon which ADA was applicable under Title III.

A lawsuit related to the education sector was filed by the National Association of Deaf vs. Harvard for not providing captions and subtitles to their online learning resources, and the massive open online contents (MOOC). The case was later settled with Harvard agreeing to add high-quality captions to their video and related content to aid the deaf in understanding the learning resources.

A brief summary of other major lawsuits is given below: 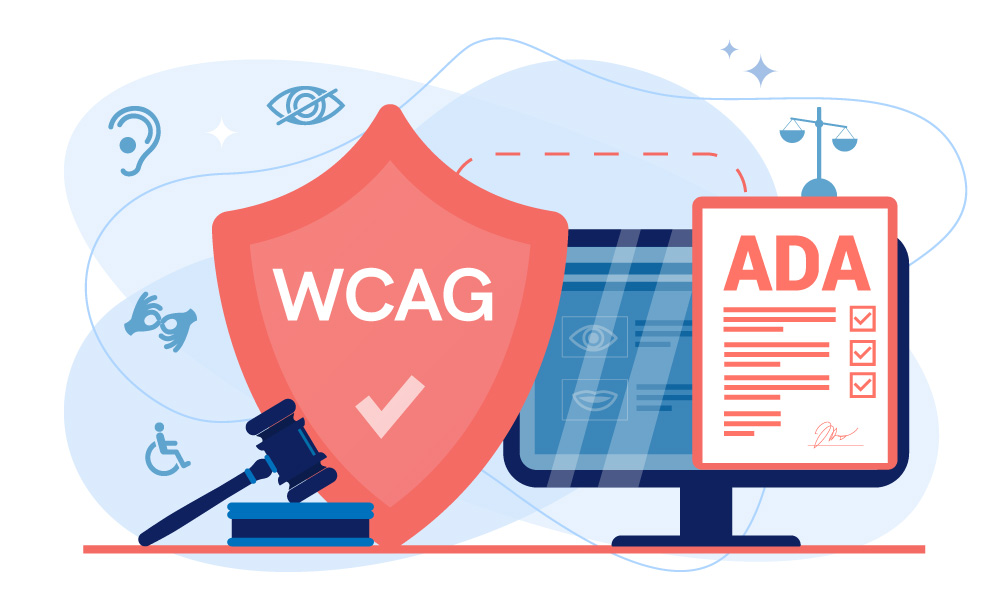 An ADA compliant website is one that is accessible to people who are in the disabled category of the ADA, where they can enjoy its online experience equivalent to others. The ADA itself does not have any guidelines for website design and accessibility, however, the U.S. courts and the Department of Justice have time and again referred to the WCAG as a reference.

Some of the key features required for a website to be ADA compliant are listed below:

How to stay in line with the ADA 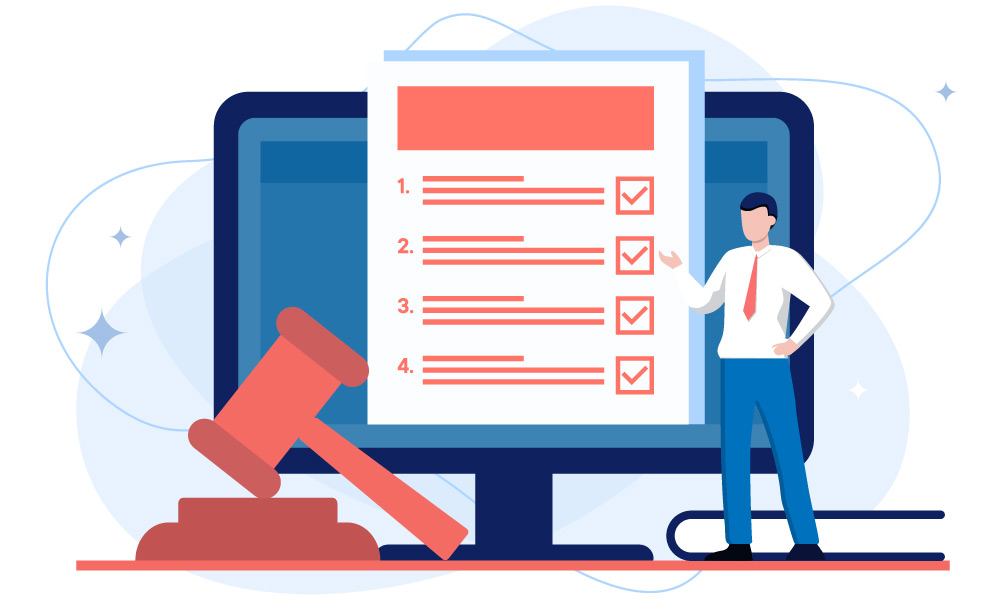 Keeping in view the heavy penalties, fines, and lawsuits resulting from ADA violations, it is important for businesses to revamp their existing websites and ensure that all new web pages are ADA compliant.

There are three steps involved in making an existing website ADA compliant:

An integral part of running a successful business is to be proactive and take steps to target a wider audience by adding accessibility features. Pixelplex has a qualified team of expert auditors, developers, and consultants that can provide assistance through all phases of an ADA compliance audit, remediation, and development. Ask us how we can make your website fully ADA compliant.