While the crypto community was busy talking about the differences between DeFi and CeFi, another new term came into the mix – GameFi. So now we have to ask: What is GameFi? And why should we pay attention to it?

The play-to-earn (P2E) trend has resulted in massive interest in the GameFi sector. P2E appeared like a breath of fresh air, bringing multiple development opportunities and contributing to the emergence of GameFi unicorns like Axie Infinity, which raised $150 million in a Series B funding round.

As we all know, where there is an interest in a topic, multiple questions will be associated with it. Read on to learn what GameFi is and how it works, find out more about its major benefits and the top play-to-earn games, and explore whether or not you should invest in GameFi development. 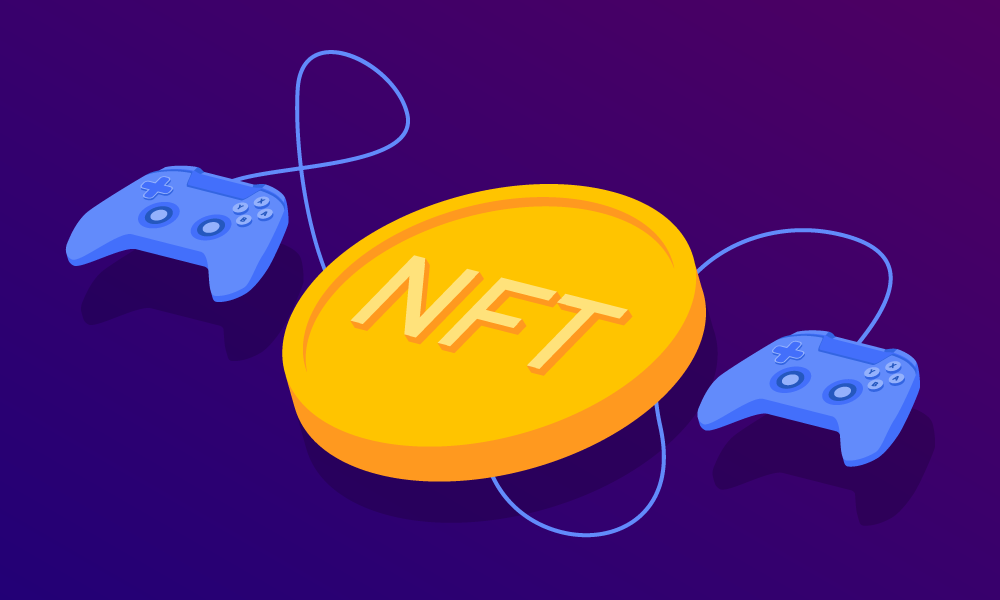 GameFi is a platform that uses the play-to-earn model and allows people to earn money through gaming. It combines the terms ‘game’ and ‘finance’ and supports the idea of an open economy, where players are rewarded with game tokens and NFTs.

The term GameFi was originally introduced by Yern founder Andre Cronje, who said,

“If gambling can be applied to monetary policy, that makes me very excited. Your money will become a tool to use in this challenging game.”

GameFi involves a wide range of interested parties, including players (who can earn money by leveling up their characters), investors, NFT and crypto game developers.

So, why has GameFi become the most discussed topic? Because it has made some revolutionary changes to the field of gaming. Previously in-game assets were restricted to centralized protocols only, which prevented players from trading their digital assets outside the platform.

The play-to-earn model, by contrast, allows users to own all their game assets even when the server is turned off.

Want to know more about trends in blockchain and gaming? Then read this article

Now we’ve figured out what GameFi is, let’s see what benefits it offers. The most obvious one is the ability to earn money and generate revenue through gaming crypto tokens.

GameFi also offers increased investment potential. Currently, interest in crypto games is at its highest ever level, so investors have begun to seize opportunities in this field. No wonder many game studios are continually developing new play-to-earn games.

How does GameFi work? 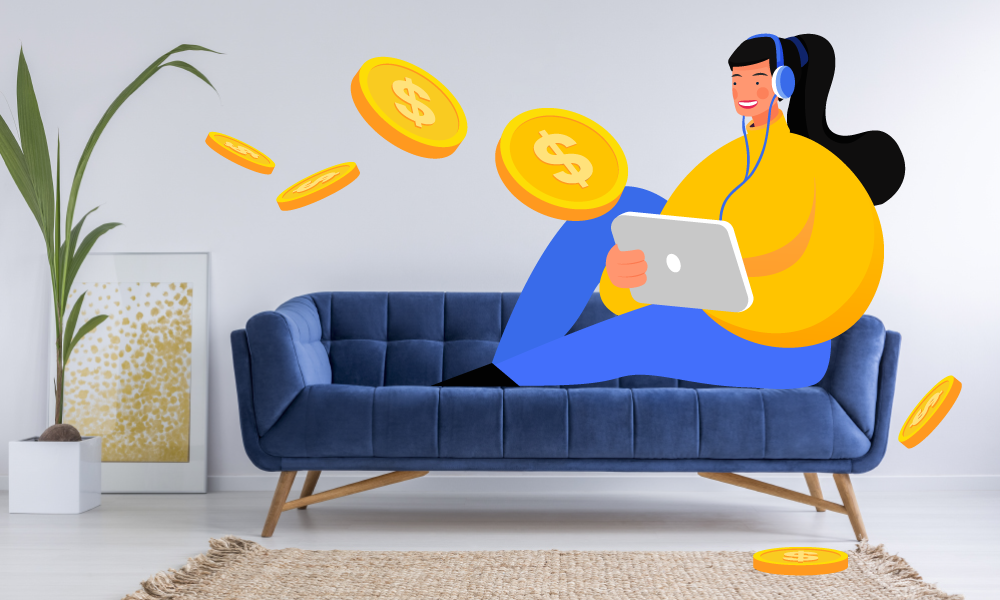 The GameFi mechanism is mainly based on 4 key pillars: blockchain technology, the play-to-earn model, asset ownership, and non-fungible tokens. The combination of these features and technologies allows users to monetize their actions in a game. Let’s see what each of them brings to the table.

Blockchain is the fundamental basis of GameFi projects, with most games built on smart contract-enabled networks. Ethereum is one of the most popular platforms for GameFi development. But Ethereum’s block space is limited, which imposes significant limitations as the costs of transactions quickly rise as soon as the amount of block space is exceeded. This has made game developers shift towards faster, higher-capacity GameFi protocols like Polygon Network, Solana, and Polkadot.

Blockchain makes sure that all transactions involving buying, selling, and exchanging items will be open, fair, and transparent. This is because all the items and their data are stored on the decentralized public blockchain. The blockchain stores data on who owns which item, which means that the players own the assets and not the game developers.

In play-to-earn crypto games, all game items like avatars, land, weapons, and gold are represented as non-fungible tokens or NFTs. Players acquire these items during the gameplay and can further exchange them for cryptocurrencies which in turn can be exchanged for fiat money.

A distinction of NFTs is that they make the characters or game items unique, meaning that they cannot be copied or faked.

GameFi projects have many levels to progress through. Players can increase earnings by dedicating time to improving their characters, monetizing their land assets through the development of structures that other players pay to visit, or battling other users in tournaments.

In contrast to play-to-win games that make money through in-app purchases, GameFi projects allow users to receive rewards for completing gameplay objectives, such as winning a battle or tournament. For example, Axie Infinity rewards its players with a portion of the game’s AXS token for achieving the game’s objectives.

Play-to-earn games also allow users to trade their valuable assets and exchange them.

As we’ve discussed earlier, in GameFi, the in-game assets are represented in the form of NFTs that belong to users and cannot be faked. Digital ownership of unique assets presents players with multiple extraordinary opportunities. Want to sell or lease your assets for other gamers to use? Not a problem at all! How about trading a game plot on a marketplace? That is also possible.

For instance, in The Sandbox, a user spent $450,000 on a plot of virtual land in the Snoopverse – a digital world that the rapper is developing. There are also other ways to monetize your virtual land, including virtual shops, casinos, concert venues, and many more.

Check out Duels – a blockchain-based game with PVP duel battles, NFTs, and its own DUEL coin 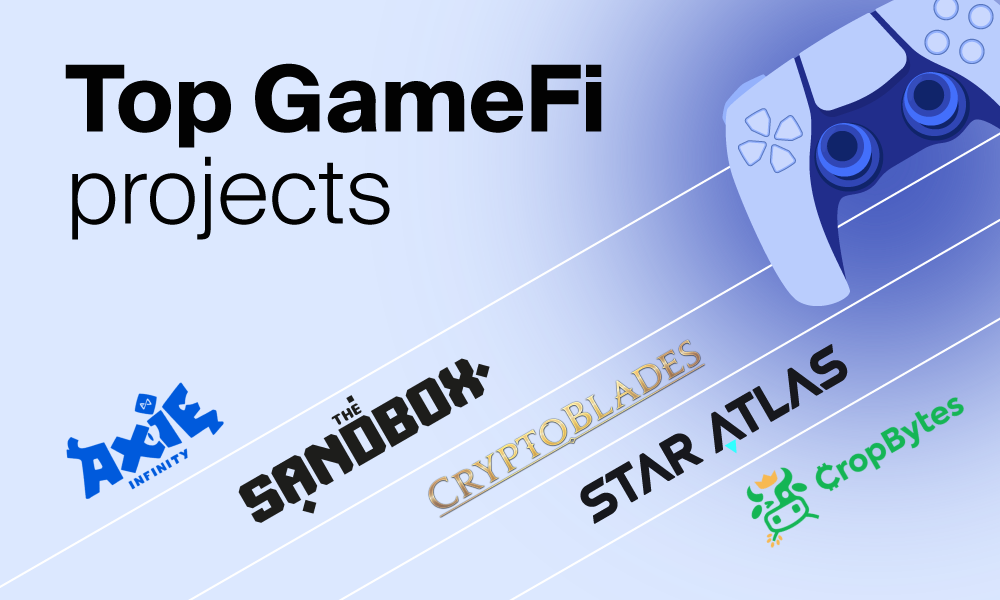 The top crypto games in the GameFi sector include Axie Infinity, CryptoBlades, The Sandbox, CropBytes, and Star Atlas. Let’s take a look at each project to better understand this phenomenon.

Axie Infinity is currently one of the best crypto games based on the P2E model. The core of the game is the Axies – the monsters that players create. They are represented in the form of NFTs and bred by collecting AXS tokens and Smooth Love Potions (SLPs). Players can trade SLPs on both DeFi exchanges and centralized exchanges like Binance.

The AXS token acts as a governance token with users deciding on how the game develops. It can be earned in the game itself by staking cryptocurrencies, creating user-generated content, etc.

CryptoBlades is another popular project that incorporates gaming coins and NFTs. It has its native SKILL tokens, which users can earn by winning battles and defeating enemies. The project is built on the Binance Smart Chain, so users have an opportunity to purchase SKILL tokens using BNB and then swap them through the decentralized exchange on Binance.

CryptoBlades users can exchange their avatars, customize their weapons and sell them as NFTs, and much more. It is predicted that by 2030 the price of a CryptoBlades token (SKILL) will reach $229.44.

Just like Axie Infinity, The Sandbox incorporates DeFi gaming elements, enabling players to own, build, and monetize their gaming experience. The Sandbox has its own token, the SAND token, which is used for all kinds of transactions in the game.

However, what really distinguishes The Sandbox from many other top crypto games is that it goes beyond the creation and trading of NFTs, allowing its users to create their own 3D games and virtual plots that can be monetized. For example, popular artists like Ariana Grande have already performed concerts in The Sandbox.According to Sebastien Borget, the Sandbox co-founder and COO, 16,000 people have bought plots of virtual land in the Sandbox metaverse.

Check out this article defining the metaverse and its major features

CropBytes is a play-to-earn farming simulation game, which encourages players to run their own farms and rewards them for their farming efforts and strategic planning. Traditionally relying on game coins for transactions, CropBytes has changed with the release of their new CBX token, which is now the sole currency in the game.

Players can receive CBX by simply playing the game and completing game quests. They can also earn CBX and spend it on different in-game assets like Superheroes, which help them boost their farm earning capabilities.

Star Atlas is a relatively new crypto game released at the end of 2021. It’s a space-themed game, which enables players to earn in-game currency, ATLAS, during their ship missions. The game offers spectacular Star Atlas ships, which are available on the Galactic Marketplace.

Why should you invest in GameFi development?

By using appealing themes, game tokens, and DeFi elements, GameFi projects have rapidly attracted both investors and gamers. The opportunity to own your digital assets, enjoy the game, and even make money from it will definitely attract traditional gamers and regular users, thus contributing to the growth of the GameFi community.

The growing popularity of the metaverse will be another factor leading to the massive adoption of GameFi, turning it into a profitable niche for both investors and game developers.

We’ve already mentioned the success of Axie Infinity, and there are many more inspiring examples. For example, MetaSoccer, a play-to-earn-based game consisting of soccer competitions, managed to raise more than $2 million even before its release.

GameFi titles will inevitably find large fan bases very quickly, so we are going to see increased movement in this industry and in its related technologies. On top of this, new gaming platforms such as MOBOX are being developed to help individuals create their own NFT games featuring DeFi functionality, and generate income while playing. So now is the best time to start thinking of a possible niche that will set you apart in the GameFi world.

The GameFi concept is definitely in its boom now, meaning that we’re going to see lots of play-to-earn games in the very near future. The ability to own your own digital assets and earn money while playing, along with other benefits offered by blockchain, will undoubtedly attract not only serious gamers but also regular players.

It’s time to unveil your ideas and take action to keep up with the race in game development. And we can surely help you with that. Whether you want to build a blockchain-based game or incorporate DeFi elements into your existing game – we’ve got you covered. With our in-depth expertise in blockchain consulting and development, our specialists will help ensure your project’s success.