OpenSea has recently introduced the Seaport protocol with an ambitious goal of making it a de facto solution for NFT marketplace development. But will it actually lead to the next generation of NFT marketplaces?

The NFT market is flourishing, with $10-$20 million worth of NFTs being sold every week. As we all know, demand creates supply, so the market regularly sees the creation of new NFT marketplaces.
In light of this, the introduction of the Seaport protocol by OpenSea brings interesting opportunities for both developers and users.

Read on to find out what the Seaport protocol is all about, learn more about its key benefits and distinctive features, and check out whether it’s worth building a new NFT marketplace on top of Seaport.

A quick introduction to OpenSea

OpenSea is currently the largest and most popular peer-to-peer marketplace for non-fungible tokens (NFTs). The marketplace allows users to buy and sell digital art, gaming, and other virtual tokens backed by blockchain. Founded in 2017, the platform has processed more than $30 billion worth of transactions as of the time of writing.

Initially built on Ethereum, the OpenSea marketplace has turned into a multi-chain solution that supports Solana, Ethereum, and Polygon. It has also acquired Gem, an NFT aggregator service. This product allows users to trade NFTs across multiple marketplaces while making it simpler to sweep an NFT floor.

What is the Seaport protocol?

The Seaport protocol is a brand new Web 3.0 marketplace protocol that enables the buying and selling of NFTs. Its major goal is to become a solution to support new and evolving cases for NFTs.

Seaport allows anyone to operate as an NFT marketplace. NFT ownerships reside on a blockchain (Ethereum or any other platform that leverages smart contracts) while the operation runs through Seaport.

When introducing the protocol, OpenSea claimed that the marketplace would not control or operate this shared protocol, and they would just be one among others building their products on top of it.

The Seaport protocol now empowers users to offer their own assets, including ETH, ERC-20, ERC-721, and  ERC-1155 items for NFTs on OpenSea.

What are the main benefits of Seaport?

The Seaport marketplace provides some tangible benefits for both developers and users. Being an open-source and decentralized solution, the protocol is open to every developer or creator who wants to build and enhance it. It will allow more people to enter the market while creating competition in the NFT industry and contributing to innovation.

The protocol brings more efficiency and flexibility. For example, it has removed redundant asset transfers, which may consume gas fees. It also provides the option to fulfill any number of listings simultaneously.

Other benefits include trading NFTs for NFTs instead of buying them for cryptos, as well as the ability to create Dutch auctions — a selling strategy where a price is lowered until a customer buys an asset.

To increase the security of their project and prevent vulnerabilities, the OpenSea NFT marketplace has launched a two-week audit competition during which any developer may audit the code and report on any detected issues and vulnerabilities. The winner of the competition will receive a reward of $1 million for their efforts.

Seaport has also been audited by two auditing firms, OpenZeppelin and Trail of Bits. OpenZeppelin performed a security review early in the development process, while Trail of Bits conducted an audit of the protocol closer to the completion of the current deployment. On audit fulfillment, both firms concluded that the protocol was safe to use.

Seaport vs other NFT protocols

So how does Seaport differ from other NFT protocols? One of the key differences lies in their approach to NFT listings. The majority of current NFT marketplaces allow only for a single type of listing, where one user supplies an NFT and the other supplies a payment token.

Seaport uses a different approach by enabling users to supply a number of ETH, ERC-20, ERC-721, or ERC-1155 items (the “offer”) that the buyer is willing to give. And for that offer to be accepted, a number of items (the “consideration”) must be received by the recipient.

Each Seaport listing has a basic structure that includes an enhanced EIP-712 signature payload. It highlights what will be spent and what will be received back. The most basic fulfillment option comprises selecting a specific listing and creating an implied “mirror” of it. In the mirror, the seller receives all “offer” items and supplies all “consideration” items.

At the same time, there are other ways in which a user can choose to fulfill the listing. For example, they can choose to complete any number of listings at once via a set of fulfillments.

With Seaport, offerers can also create new zones and deploy new conduits. A zone is a contract that performs additional validation before the fulfillment. It can cancel the listing on behalf of the offerer. A conduit is a type of contract where offerers specify token approvals.

These two concepts provide creators, collectors, and platforms with greater flexibility and the ability to choose how they want to use the Seaport protocol while ensuring broad composability with other listings on the protocol.

What types of order does Seaport support?

The Seaport protocol supports four different types of order. These include:

Planning to develop a brand new NFT marketplace? Then check out this guide for a detailed explanation of how to do it right

What distinctive features does the Seaport marketplace have to offer? 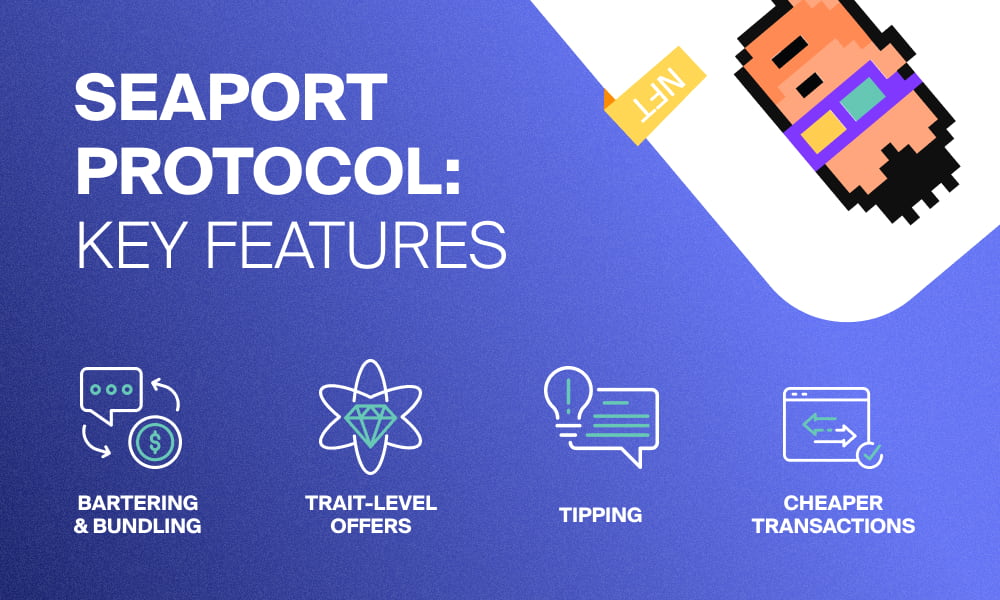 Bartering and bundling, trait-level offers, tipping, and cheaper transactions are among the key distinguishing features that make the Seaport protocol worth your attention. Let’s deep dive into each of them.

By empowering users to offer their assets for NFTs, the Seaport marketplace enables bartering, which means that users can bundle some of their ETH and NFTs together to buy a new NFT. This way OpenSea facilitates more granular trades by allowing users to specify individual NFTs or certain traits in a trade.

For example, you can post an offer to trade your NFT for a particular CryptoPunk, leveraging its ID number. Or you could post an offer where you would only trade your Bored Ape for one of the nine Alien CryptoPunks. It all brings more flexibility to the OpenSea NFT marketplace and provides users with multiple options for NFT purchases.

Another distinctive feature of the Seaport marketplace is trait-level offers, which means that you can specify the traits an NFT artwork or a specific collection should have when making an offer.

Imagine you want to purchase a CryptoKittie with “Laperm” fur. At present, only 2% of CryptoKitties possess this trait at the OpenSea marketplace. With the Seaport protocol, you can specify that this type of CryptoKittie is the only offer that you would accept.

The Seaport protocol also supports tipping. For instance, if you list your CryptoPunk NFT, you may include additional “consideration” items or “tips” in your listing.

The tip will go to the person you are exchanging an NFT with. At present, the only restriction is that you cannot tip more than the original offer.

This option is also beneficial for alternative interfaces that can charge their own fees.

Gas fees are the Achilles’ heel of the OpenSea marketplace. The Seaport protocol addresses this issue with gas optimizations of the contract, which now includes a significant amount of assembly code. Assembly code is more granular compared to Solidity and other high-level languages and it brings a higher degree of control. The use of assembly code should help make transactions cheaper.

Just like many NFT trading platforms on the market, the OpenSea marketplace has always been subject to fraud and scams. For example, a recent OpenSea phishing attack resulted in over 250 NFTs being stolen from 17 users. It was estimated that the attack was worth over $200 million.

The Seaport protocol will offer users a safe platform to trade NFTs. As we’ve mentioned earlier, the protocol was audited by two different firms with no vulnerabilities being found.

At the same time, the Seaport protocol cannot guarantee that it will fight scams, so there will always be a possibility of that. For example, hackers often create fake links where they offer fake NFTs to users. In many cases, the websites look nearly identical with just one character being altered or misplaced in the website domain. For instance, a zero can replace the letter ‘o’.

Therefore, users should remain careful and check out all links before making a purchase. Meanwhile, platform developers should add some preventative measures to minimize risks, such as integrating two-factor authentication. Also, there are ready-made solutions like CheckNFT.iO that analyze NFT collections, detect risks, and notify users of fraudulent activities, thus helping prevent scams.

Should you build an NFT marketplace on top of Seaport? 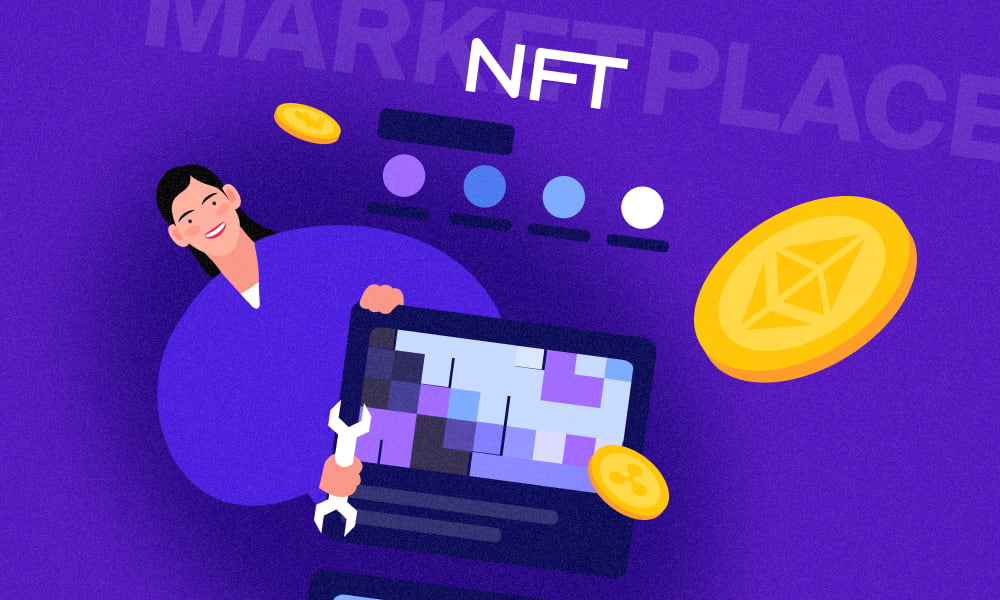 NFT marketplace development remains a profitable niche that attracts creators, collectors, investors, and developers. According to a report prepared by Chainalysis,

“In 2021, users have sent at least $44.2 billion worth of cryptocurrency to ERC-721 and ERC-1155 contracts, the two types of Ethereum smart contracts associated with NFT marketplaces and collections.”

The release of Seaport brings even more opportunities for developers by providing them with an efficient solution for NFT marketplace development. Moreover, due to the open-source code of the protocol, the market may get involved in competition to create killer features that will attract more users to the industry.

It is likely that the Seaport protocol will be chosen by multiple parties for the development of future NFT marketplaces, thus gradually becoming the standard for the NFT market.

Is it a good idea to invest in NFTs after all? Find out in our article on NFT investment

Is Seaport the future of NFT marketplaces?

Judging by what the Seaport protocol promises to offer, it clearly has every chance of winning users’ trust. The protocol offers a greater level of decentralization, which ensures lower transaction fees and optimized contracts that are usually more difficult to implement in a centrally-governed system. All this, along with new distinctive features including bartering, trait-level offers, and tipping, may result in a new era of decentralized NFT marketplaces.

Moreover, as NFTs continue taking over the digital market — from digital collectibles to metaverse lands — users will need consumer-friendly NFT marketplaces with unique features and experiences.

Contact our team of blockchain consultants and developers to discuss your future NFT marketplace. Having been in the blockchain industry for 15 years already, we can advise you on efficient monetization strategies, construct an optimal tech stack, and assist with project implementation.